Example: Don’t even mention marriage around Jane right now. She’s still reeling from the worricane she had last Valentine’s Day, when her fortune cookie told her she should learn to enjoy solitude.

Sometimes a writer needs to get away from the screen and get out the markers.

Dialogue. The Big D. The Cheese Burrito. (Don’t ask me why I threw that last one in– just roll with it.)

It’s a fundamental part of fiction: one of the best ways to show rather than tell (i.e., let your characters speak for themselves…literally), a great way to communicate information quickly, and an excellent pace-quickener, among other things. Perhaps more than anything else, it’s natural.

Although our dialogue will ideally read like speech, sometimes it doesn’t. Sometimes it sounds like writing…and sometimes there are other challenges. Have you ever, for example, had trouble with one of these?

What challenges have you encountered with dialogue? And (if applicable) how did you read, teach, or talk yourself out of them?

BONUS QUESTION OF THE DAY, completely unrelated to writing and usual Forum Friday material: can you think of any pop songs that tell a story as the story is happening?

Think “Stan” by Eminem, where you hear letters as they are being written, or “Internet Friends” by Knife Party, where a crazy stalker shows up at her new Facebook friend’s house when they block her (and you actually hear the doorbell, knocking, phone ringing, etc.) Heads up– both songs contain language/contentious material!

See the Julieism gallery for more definitions and mischief!

After a wonderful reader kindly observed that I’ve a tendency to fashion new words, I began more closely monitoring my expression so as to catch such plays in action. The result?

C’EST VRAI. I may not drop them at the rate a chocolate hen drops Cadburry eggs, but I drop ’em.

Me being the creative mischief-maker that I am, I naturally resolved to take note of such creations and share favorites on the Magnificent Allshare that is the internet. I’ve already established a “Julieisms” page on my author website, and will now periodically deposit these expressions there as well as here.

My first entry for the running theme I am calling The Julieism Dictionary is this:

one leg in /wʌn lɛg ɪn/ adj. 1. half complete; having started, but being perpetually far from finishing something, usually a project 2. having only the first leg into one’s trousers

More nonsense is in the making– follow the excitement and expand your lexicon today!

A couple weeks ago I was designing a pseudo press release and needed some new fonts to make it look more legitimate. Once I figured out how to download and install new fonts on my computer, which is surprisingly simple,  I was blown away by the copious quantities of typeface freely available online and promptly wandered the internet’s vast resources like an elated kid in a candy store.

Today I share a selection of spoils from my treasure hunt. (Look for an upcoming post in which I share my favorite new fonts.) First you’ll need to know:

Now– perhaps you need some convincing? If my fictional press release didn’t do it, consider the following:

Bad news: they just announced a meteor the size of Donald Trump’s ego is hurtling towards a fire-y (get it? “You’re Fired”?) orange collision with earth.

Good news: you’ve got a seat on a shuttle out. Let’s blow this popsicle stand!

You sure know how to travel. So long, suckers!

Bad news: space is limited. You don’t even get a full suitcase. You probably won’t be able to fit any more than three books in the box you’re allotted. 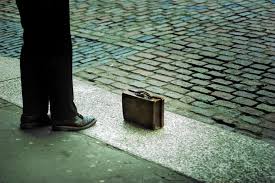 The question: which three books do you take? This is the end of the world as we know it, remember…so

This image is TOTALLY relevant, I swear.

—–The Resulting Poem from Today’s Round: Bad Similes—

His eyes were like
slick oil spills, oozing dark desire like
a goth chick’s emoticons. He smelled much like
the acrimonious sins of fathers waking beneath the apathy of mankind. And when he spoke, his voice was like
the song of a cicada in a sweet Georgia pine, menacing like
the heart of a benevolent spirit, traveling through the dimensions of time like
a little girl in a tutu with both shoes on the wrong feet. Handsome as
tepid coffee and a bowl of soggy cereal on a Monday morning, that one.

If only we could say the same for bad similes.

Guys, that was awesome! Hope you all had as much fun as I did. Give it up for contributing poets Lex, Tony Espino, Sahm King, Lilith Colbert and Emma Snow! This is the last of the poetry prompts The Read Room is doing for National Poetry Month, but I do hope you’ll all keep writing and help me make more creative mischief soon! 🙂

Today’s poetry prompt concludes both The Read Room’s week-long series of Interactive Poetry and my series of practices for National Poetry Month. Sometime next week I’ll aim to make it out to the bookstore and slip the poems I made (transcriptions and blackouts) into books. Yay! Celebrate! I’ll try not to buy too many books while I’m there (IS there such a thing? says the idealist. Um, YES, the wallet replies).

SO, in the spirit of ending things with a flying-crane kick, I saved the best (meaning, the worst, but probably most humorous) prompt for last.

Player 1: bacon burnt to the frying pan. The vice of her grip was like

Player 2: a shark chewing jerky. She seemed troubled, like

Player 3: Taylor Swift when her ex walked in. Etc.

At the end of the day I’ll post the complete poem formed by all the various players. Contribute as many times as you want to and have fun!

The simile we will be improving (/worsening, which in its own backwards sense is still an improvement because the original was so spectacularly awful), comes from the Twilight series and originally described Edward’s eyes as “like liquid topaz”. *Rubs hands together and cackles* LET US WRITE.

Your line, first player, is this:

—–The Resulting Poem from today’s round—–

The hours erased the stars and day peeled apart from night

a dawning appeared from the aftermath of apartheid.

The fleeting memory of times shared, now a part of me erased

save ghosts and their imparting, which leave my thoughts defaced.

Woo hoo! Great work Joel and Jennifer, and well done also to Lex of Inkiebird and Shawn Bird of her self-titled blog for writing their own poems from the prompt. Thanks for playing– hope you had fun!

Here at The Read Room we’ve been celebrating National Poetry Month with a series of interactive poems written by YOU, the readers! I supply the prompt and you guys do the rest — just comment below and play off the lines before you!

Today’s prompt is Must use the word “part”. Use it however you will: hair part, a part of ~, partition, party, apart, parting, impart, partial, etc. etc. Anything will do. Surprise us!

…And if you can’t figure out how to use part, there’s always the old fallback “pants”.

The hours erased the stars and day peeled apart from night

—–The Resulting Poem from Friday’s Round of Linked Freeverse—-

Awaking to the owl and the moon
An inflatable monk slit his throat –
the air poured out and soon
was a lifeless coat.

Tony Espino, you’re a star! Thanks for contributing not just today but all week. Give it up lads, and check out this poet’s eponymous blog and his book, Orphan of Reality!

If you heard the phrase,

Awaking to the owl and the moon

what would you say next?

Now’s your chance! This week at The Read Room we are writing poems by playing off of one another’s comments.

To play today’s round of Linked Freeverse, you needn’t rhyme or even make sense– just write something to follow the comment of the person before you!

At the end of the day, I’ll compile everyone’s lines and post the full composition. Check out Monday’s and Wednesday’s rounds of Linked Freeverse for inspiration 🙂