I haven’t posted all this month, so I thought it time for a check-in.

Writing-wise, I’m excited to be developing a new Agent-approved book idea! I can’t tell you much about it yet (gag rule), but I can say the concept’s a rich playing field for the surreal within the contemporary. Already having fun with that. *cackles*

On other artistic fronts, after years of lusting for a high quality camera, I’ve finally, finally, FINALLY purchased a Nikon DSLR. I have experience shooting both film and digital, but I never imagined what a task it would be figuring out the controls in the vessel that combines them! I’m finally starting to get the hang of it though, and mapping features has been a good chance for me to review my photography basics.

figuring out how to adjust aperture

Now if only the rain would let off so I could take it out to play more!

Reading: a great many great books. TBR and TBRR (re-read) piles constantly on the rise. Will be posting a Top Reads of 2015 selection soon!

Watching: the second season of The 100 and the third of Parks & Rec. How I ever went this long without the comedic gold of Leslie Knope I’ll never know.

Listening to: Um, kind of falling in love with Panic! At the Disco lately. Since I got a set of Skullcandy, I swear I’ve been listening to Death of a Bachelor on repeat. I haven’t been this excited for an album to drop since AM! Also getting into Melanie Martinez, Halsey, and The Zolas, who I already liked, but keep finding more amazing singles from (Maggie Stiefvater introduces me to some of the best tunes).

Learning: assorted French. Said Nikon/photography. How to bottle the stars.

I’ve had a few creations lying around on post-its forever and last night I finally typed them up! May I present…

befuddle v. to make confused, as by swift speech; to render unable to think clearly

consternation n. anxiety or dismay, typically at something unexpected

meretricious adj. apparently attractive but having no value or integrity in reality

Isaac felt an increasing sense of consternation as the interrogation proceeded. He’d told a few taradiddles to the first officer that interviewed him– innocuous answers to seemingly fatuous questions. Then a second officer had entered the interrogation room, relieving the first, and now, as the questions poured swiftly at him out of order and circling back around in ambush, he felt guilty, even though he wasn’t. He could see this second officer was attempting to befuddle him and catch him in a lie– trying to find out who he was protecting. It wouldn’t work.

Now the second officer tried a new tactic. “Doughnut?” she said suddenly, smiling as she offered him a meretricious fruit-filled pastry.

Today the Read Room welcomes as guest author Kate Scott, who is here visiting on a promotional blog tour for her new book, Counting to D. Counting to D releases February 11. Give it up! 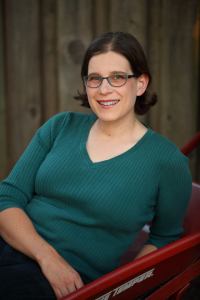 I know Julie Israel in real life, sort of. We’re in the same writing critique group. We’ve met face to face numerous times. I’ve read her fiction. She’s read mine. We’ve talked about writing, and we’ve traded book recommendations. But I don’t know anything else about her.

We aren’t friends. We’re barely even acquaintances. All I know about Julie is the fiction she invents, and she doesn’t know anything about me beyond what I write. My lack of knowledge regarding Julie’s life doesn’t mean she doesn’t have one, though. I’m quite certain Julie is in no way a one-dimensional person. She feels a myriad of emotions every day. She has hopes, fears, dreams, and regrets. She has to. She’s human.

If I were to write a story about my life, Julie would be lucky to make anything more than a brief cameo. If she even appeared at all, it would be unlikely for her to receive a name. Julie isn’t a major player in the Kate Scott story. She barely qualifies as a member of my supporting cast. Yet, she exists all the same, fully formed and infinitely complex. Funny how reality works that way.

I’m a fiction writer, not a memoirist. My YA novel, Counting to D, tells the story of a girl named Samantha Wilson. Samantha’s life is complicated. She has hopes, fears, dreams, and regrets. But so does everyone else in her world. As an author, it’s my job to remember that.

Characters, both large and small, enter stories for a purpose, and each scene needs to move the story forward. Writing in first person, it’s easy to get caught up in the life of the main character and to think of the other characters as nothing more than animated props. But one-dimensional people aren’t real, and one-dimensional characters shouldn’t be either.

Minor characters need to have their own lives with their own problems. Sometimes, those problems intersect with the main characters’ and make it into the narrative, and sometimes, they don’t. But their lives always dictate who the characters are and how they interact with the people around them.

One of my absolute favorite characters in Counting to D is a girl named Kaitlyn Banks. At the beginning of the story, Kaitlyn is introduced as a mean popular girl, and it would have been very easy for me to keep her that way. But as an author, I found myself asking the same question every time Kaitlyn walked onto the page: “Why is this chick such a bitch?” Once I figured out the answer to that question, my story’s stereotypical villain became a beautifully complex character with a subplot all to herself.

As a general rule, I require myself to make every single character in my books significant enough to receive a name and their own character arc. Granted, some of these character arcs are smaller than others, and they may unfold in only a few sentences. But together, they weave a larger and more compelling story.

Counting to D is about Sam, but Sam doesn’t live in a vacuum. The people around her help shape who she is. More importantly, the people around her are people. I’ll say it again: one-dimensional people are mythical creatures that don’t exist in real life and shouldn’t appear in fiction either.

Julie might not know me any better than I know her, but just as I’ve read for her, she’s read Counting to D. The first thing she said to me after she finished it was, “You write really great supporting characters.” I accepted her statement as a compliment, even though I knew she was wrong. I don’t write supporting characters at all. I can’t—because there’s no such thing.

Hoorah! Underneath the Juniper Tree put “Eveline” (my poem after Poe’s “The Raven”) up on their website! Check it out 🙂

Underneath the Juniper Tree

Every so often, we receive works that we fall in love with, but due to limited space, we cannot put them in the magazine. Here is a poem that exceeds our limit for poetry, but we loved it so much, we decided to share. Thank you Julie Israel for sending “Eveline” to us! All of you may visit her website at http://www.julieisrael.com

The clouds a brew and darkness falling, one night I paced the graveyard, stalling

Where youths had grouped and aimed their boots at a yowling shadow under pines.

I quickened my step, halfway stumbling, and yelled and chased and threatened grumbling

When that velvet creature crumbling under kicks did my mind define—

‘Leave it be!’ shouted I; the youth did flee and mind define

A cat coal black and half-alive.

On this of nights, All Hallows’ Eve, I thought it were not…